Like I said in my previous blog, I am going to clear my back logs as fast as possible. Some of the posts have been sitting inside my thumb drive for months and if I didn't get rid of them now, I don't know when is the best time to do so.

My idea of a good afternoon tea time... well, of course, would be a good cup of tea or coffee! Not necessarily a high tea session at posh hotels or elegant cafes for me, as even a simple RM2 cup of tea is sufficient to make my day. When the kopitiam craze started, Jenn & I always patronised Old Town Kopitiam. Back then their coffee & tea were the best! Perhaps they expanded too fast through franchising and own expansion and as a result, failed to control the standard of their F&B. These days, you would see at least one kopitiam everywhere you go... 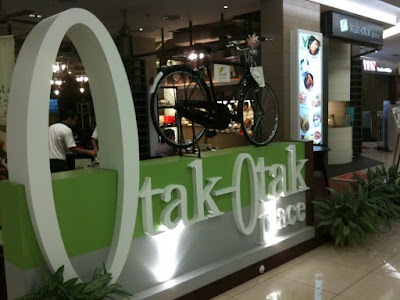 Otak-otak Place is another kopitiam-styled establishment, but with a new twist. As the name suggest, their signature food is otak-otak, a delicacy originated from Johor. So far I have only gone to their 1Utama and Tropicana City Mall's outlet.

Also known as otah otah, this dish is prepared using fish (normally tenggiri or mackarel) mousse wrapped in daun nipah (my English failed me once again!). Then the otak-otak is either grilled or steamed before served. Correct me if I'm wrong but I think Otak-Otak Place only served the grilled version.

And when it is grilled, the daun nipah will emit a rather strong aroma which will make the otak-otak aromatic and delicious. 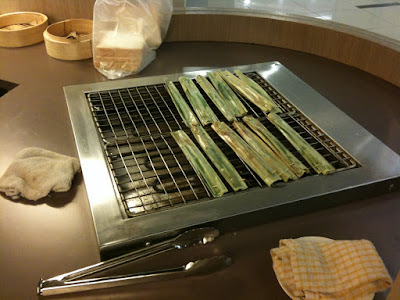 Back to the place, if you happened to visit their 1Utama outlet (which is located in the New Wing by the way)... you would notice a lot of stuff that reminds of our youth (to those who was born before 1990)... like this congkak. 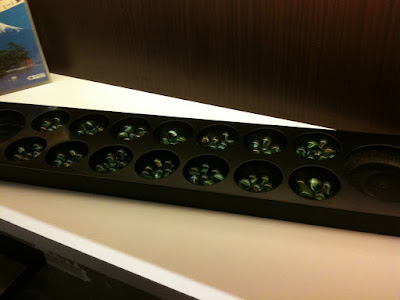 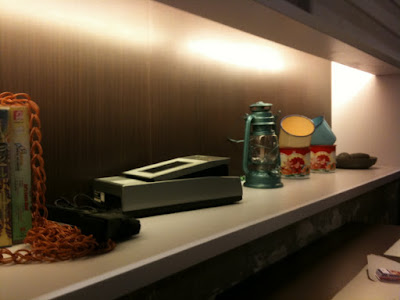 They even used homework book as menu.. obviously trying to make you reminiscent the olden days! in my case, it really works! I remember playing guli, congkak, rubber band rope, etc... which makes me think that the children nowadays are so pampered with PSP, Wii, iPod, iPhone, etc... 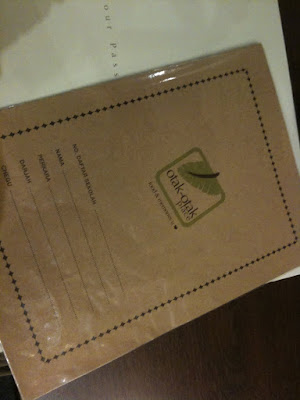 During tea time, there are a few sets to choose from the menu. I settled for their Set A which comprises of kaya & butter toast (mediocre at best!) served in dimsum basket, half boiled eggs which were perfectly done, and a cup of teh tarik. Costing only RM5, definitly a value for money. 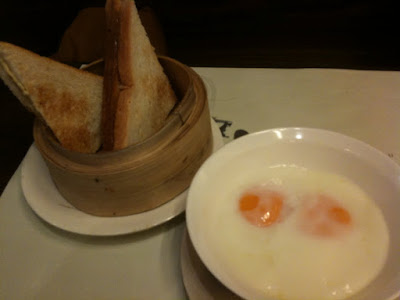 I have to say that I love the teh tarik here.. as it's milky but not to the extent of overly sweet. With a piece of Hup Seng cream cracker to dip in, I felt like a school boy once again :) 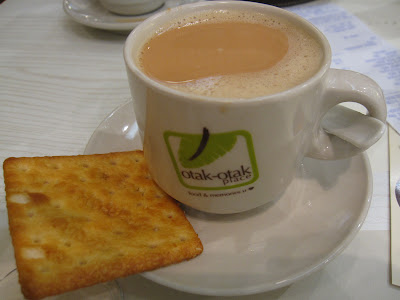 Their ayam percik with nasi lemak @ RM9.90 was OK... not too bad but also not blowing my hat off. The acar was good though but I wish that the ayam percik was more fork-tender. 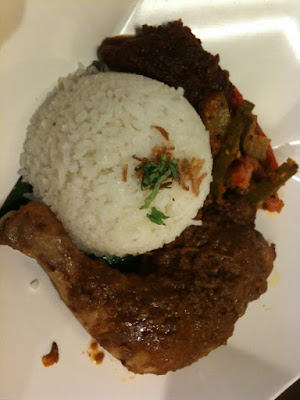 I also ordered their set of otak-otak sticks (5 pcs) at RM3.. normal price would be RM5.50 but they were having promotion at that time. The promotion probably is over coz I had these months ago.. lol!! Anyway, taste-wise it was slightly spicy which suits my taste bud. I'd say one set is definitely not enough for me :P 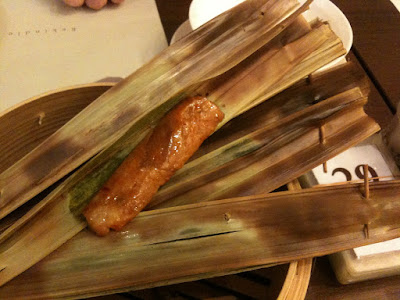 Feeling greedy, I ordered their otak-otak toast. instead of kaya & butter, you spread the otak-otak onto the toast before eating. Heavenly! 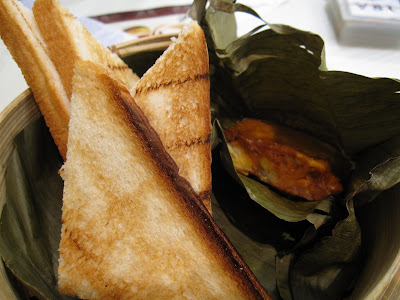 Leo's verdict - they do sell some of the old stuff that I mentioned earlier in this post but at a rather high price. Service was quite fast and attentive...
Posted by thule a.k.a leo at 7:02 PM

i keep walking past this place at 1 utama as well as puchong's ioi boulevard, but i've never managed to try it. i've heard a lot about their otak-otak burger, which i definitely would order!

i had their steamed one before if i remembered correctly. But still prefer their grilled version. yea.. the stick's portion was small :(

waoww. spread otak2 on bread before whacking is just too damn shiok! that's like the best grade of 'butter' ever rite? LOL

I like the concept of Otak-Otak. Very nostalgic. But I'm no fan of the otak-otak dish, which explains why I'm not-so-brilliant! haha

not exactly a fan of otak otak, so still havent tried!

sean - I have only gone there a few times... and then I started to patronise Papparich for their hainan cham :P

eiling - doesn't mean that you are no brainer even if you don't eat otak-otak. I eat a lot but I don't see that I'm THAT brilliant :P

joe - it's a matter of acquired taste really.

Urghh..Unka & I went once & vowed nvr to go back. Heh.. But the little toys & tiffin carriers & so forth really invokes so much memories of times before Wii, twitter etc ;p

so yummy. got to try someday

I really had a bad experience in last week where i & my family stop in otak-otak place in 1-utama to eat. I had to ask few times for the staff to come over to help to clean up the table before ordering. Addition to that, the staff show his angry face to us and throw his serving dish in front of us. Is it the service they are offering to their customer? We are coming to this place to eat & not purposely to watch your angry staff to show off his anger in front of us. Should be paying an undeserve service from them?

you can compare the rates of hotels within the same area, with similar names or with the same star rating, among other selectable sorting criteria.

they got 1 store also selling muar otak otak in pudu area kl.as i know all the otak otak r delivery every day from muar. u guys can get it a try. can't remember the place but can contact them. tel: 012-3200345