Ever since my friend (who lives in Bangkok by the way) brought me to have dinner in Chinatown 5 years ago, I was immediately impressed by the food. As a matter of fact, I had already forgotten on the restaurant that he took me to but the only thing I remember about Chinatown was the heavy traffic and the colourful neon lights that lit up the whole area at night! This time in Bangkok, I have learned to utilise Skytrain/BTS/MRT system to get to places. Like my friends said, it's really dumb-proof and I regretted for not learning about this sooner. Once upon a time, I was stuck for an hour in the same spot while taking a taxi to Chinatown :P 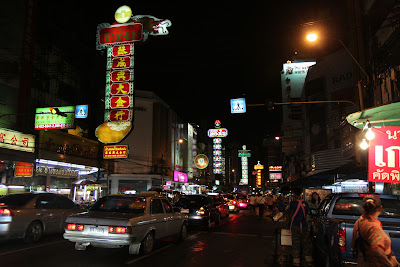 The nearest place was Hua Lamphong MRT station and that was the last station where we took the MRT to... and then tut tut for another 70 baht to get us to our destination - T&K Seafood. Total rip-off if I may say as it was so near from the MRT station but then we were too lazy to walk so no choice.

It's easy to spot T&K Seafood as all the staffs are donning green coloured T-Shirt. There is another restaurant directly opposite T&K that wears pink T-shirt. Competition is very high among both restaurants as their staffs would literally shout and asked you to patron their outlet. Since I had already made up my mind to dine at T&K, choice was easy! Note - I didn't know the name of pink T-shirt's restaurant but my friend said that they whipped out equally good quality food so maybe next time I will try them.

For most people, alfresco dining is the way to enjoy the seafood but to those who couldn't stand the heat and stuffyness like me, they have air-conditioned room for you to enjoy your food. However it's located on the first & second floor of the shoplot. As both Jenn and I were rather early, we got our table on the first floor. Do not expect grand decor as both floors were rather small and cramped.. the only good thing is that it's cool! 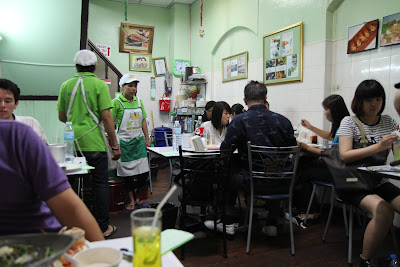 Their menu was rather funny I'd say - my guess is that both caricatures were Jackie Chan and one unidentifiable guy (Jacky Cheung perhaps?). 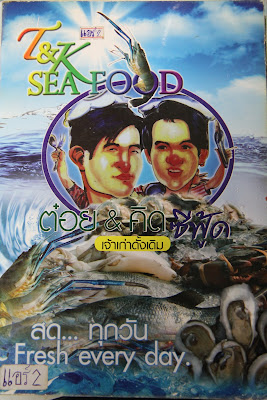 Time to engorge ourselves with Thailand's pride - Singha Beer! 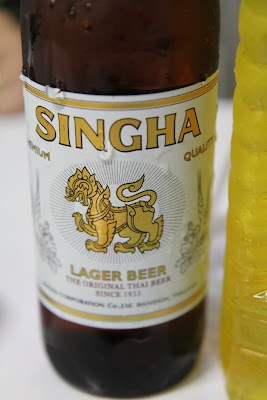 Our greed made us ordered more food than we could afford to fill into our stomach.. again! But after reading numerous rave reviews on T&K, our greed triumphed our logic. We asked for their dipping sauce and promptly served with these 2 - personally, I prefer the green spicy sauce which was great to go with the dishes that were about to be served. 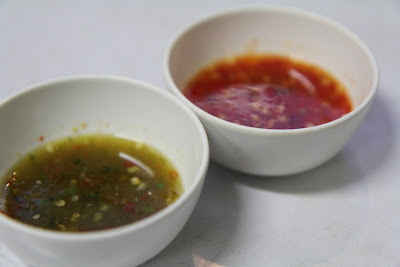 Fresh oyster - at 40 baht each, the size was not huge but definitely fresh! I squeezed the lime, sprinkled the oyster with deep fried onion and lastly add some accompanying chilly sauce - the result??? Awesome :) 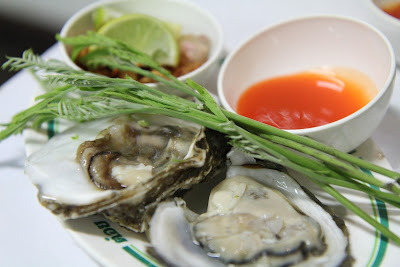 Finally! T&K managed to came out with fantastic version of steamed squid in garlic, chilly and lime (150 baht). The soup was perfect - spicy, sourish and piping hot! Better than the steamed fish version that we had in Ban Khun Mae the previous night. Coupled with the fresh squid, we finished the whole plate until the last drop! 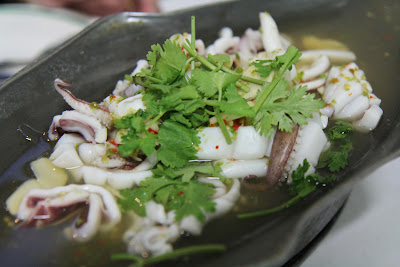 Stir fried bittergourd tip (60 baht) - despite its name, this dish was not bitter at all. In fact, it was rather sweet and packed with flavour from the garlic & chilly. 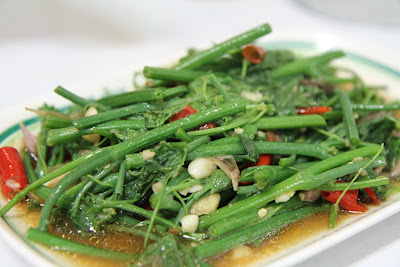 Grilled babylonia areolata (200 baht) failed to make its mark. These snail-like creature was so tough to chew that we didn't finish it at the end of the meal. 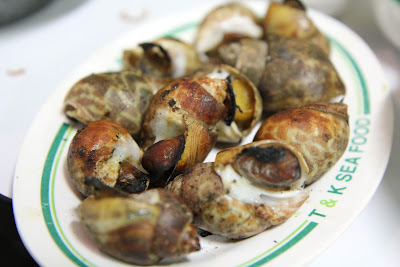 Grilled spawn crab (350 baht for medium sized one) lived up to its name - full of the delicious artery-clogging roe! They were out of the bigger ones so we had to settle for small size. We loved it so much as the meat retained its natural sweetness and the roe was oh-so-juicy and sweet! 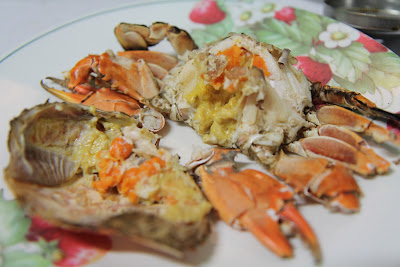 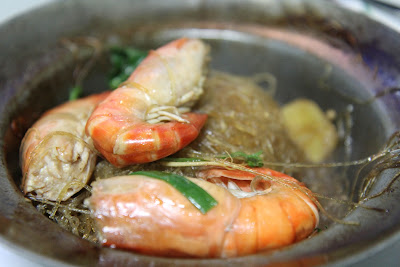 Highlight of the night belongs to a very simple dish - Grilled Prawns (150 baht for small). To our delight, 4 big prawns were served in front of us. You couldn't get 4 prawns this size anywhere in Malaysia with this price.. this I can assure you. Remember the greenish sauce that I mentioned earlier? The prawn and the sauce were a perfect combination. However, it was equally delicious just to devour the meat alone. 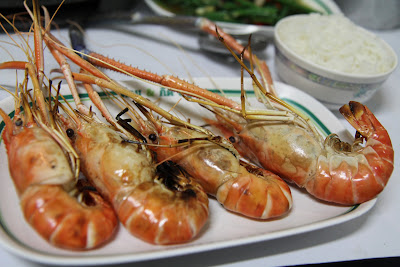 Look! The prawns were also filled with roe :) 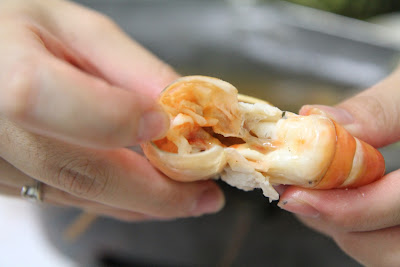 Jenn was craving for soup so she ordered the fish maw soup - I had it in its original flavour but being Jenn, she added vinegar (lots of it) into the soup. 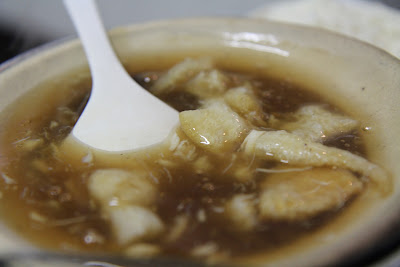 Paid our bill and left the restaurant only to be greeted with the sight of huge crowds waiting downstairs for tables. Luckily we arrived earlier :) even the alfresco dining area which was rather empty earlier now packed to the brim with more people waiting for their turns! 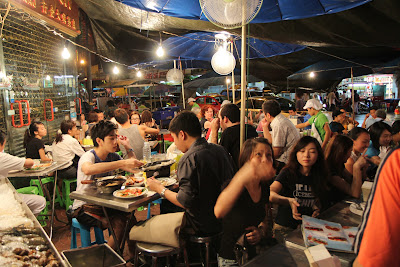 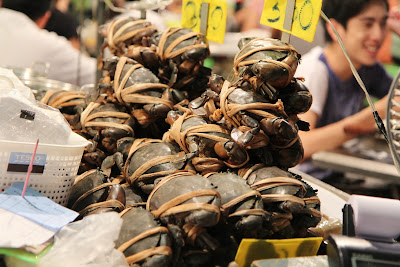 This is the scene of T&K Seafood from across the street. See where all the people are standing?? They were still waiting for tables when we left! So if you are planning to dine here, please come before the dinner crowd starts to pour in. THis restaurant is very popular among the locals and tourists. 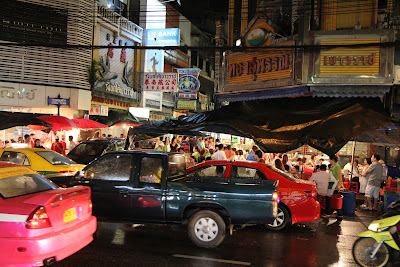 As we walked to next destination for our dessert, I spotted several mobile stalls selling the famous Durian King of Thailand. Since Jenn was too full, she skipped the durian. I can't help but to wonder on the long peduncles. 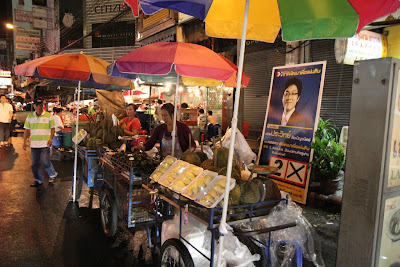 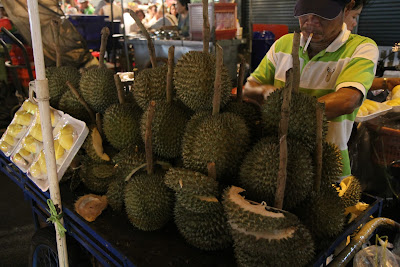 A few doors away from T&K is Namsing - famous for its bird nest soup. I have read some reviews on this place and what could be better than ending our night with something sweet and nutritious? 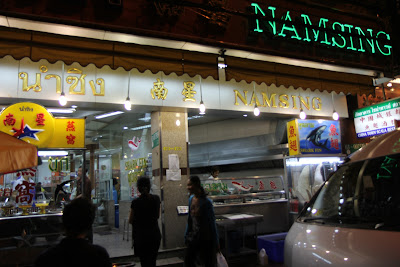 I had the White Bird's Nest (3rd class) with Longan - frankly, I have never tried the first nor second class so I didn't know the difference. However, the bowl was full of bird nest and worth the 300 baht paid! Jenn's bird nest with ginkgo was equally sweet. 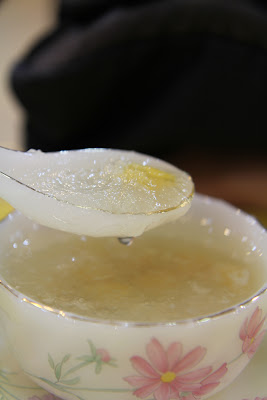 Leo's verdict - Total bill for our dinner came to more than 1200 baht but I'm not complaining. As a matter of fact, both of us think that the price was worth it. We have come for the all seafood affair & ended up satisfied. Took MRT to Siam Paragon and walked around until they closed for operation as we were too full to sit down.

Disclaimer:
1) I'm not paid to promote/endorse any particular event, restaurant or person in this blog. ALL are based on my unbiased personal opinion.
2) My reviews are based on my personal taste and preference and therefore may vary for others.
Posted by thule a.k.a leo at 4:50 PM 9 comments: