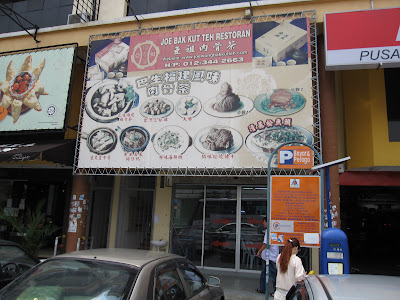 Normally I wouldn't eat bah kut teh 2 days in a row. I just had one of my favourite BKT in Kepong the night before and therefore, I would look for other stuff to eat. But when Gerald sent his Landcruiser to Batu Caves for servicing, he asked me to pick him up on our way down South. "Do you know any place to eat BKT?" he asked. This guy just won't get bored having the same stuff everyday, I thought. We just had BKT last night... sigh! Then I remember reading about a restaurant serving one of the best dry version of BKT nearby. Thank God I brought the food guide along too (thanks to Jenn for the wonderful gift) so I browsed to see if there's any restaurant nearby.

Nothing fancy from the outside, just a big sign with its name and pictures of their dishes. Sliding glass door separate the interior from outside. Even though it's indoor, sometimes you would see some inconsiderate patrons who smoked like chimneys inside... feel like going to their table, throw the ciggies onto the floor, step on them and shout "Tak Nak!" On the inside, everything was simple... plastic tables and chairs, cement floor. No fancy decoration or design whatsoever. 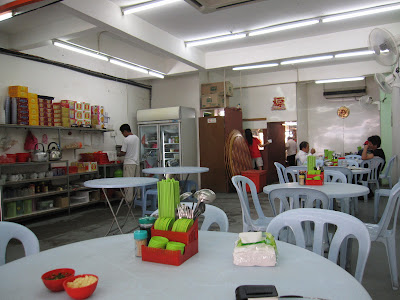 As there were only 2 of us, we could not order too many dishes to try. Almost every table had a pot of dry BKT and so it only made sense that I ordered one too. It turned out to be the best dry BKT that I ever had so far. The scrumptious dry BKT was prepared using the chef's specially-made soy sauce together with dried chilly & dried squid, and served piping hot in a claypot.. It only took one bite to win us over with its strong aroma of dried squid and spicy-ness of the dried chilly. 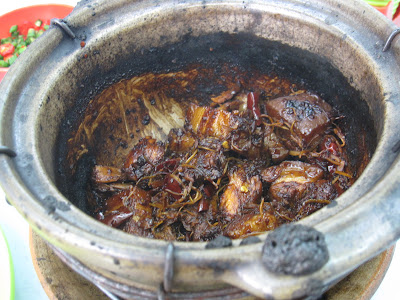 The other signature dish was Braised Pork with Nut & Chinese mushroom... a traditional Hokkien treat. The pork is marinated with liquorice, soy sauce, cassia and five spices and then wrapped in gauze with peanuts, chinese mushroom, chestnuts & lastly braised until the meat becomes tender and soft... using with just a piece of cloth! This dish tasted just like tung po meat (different version compared to the Cantonese style). The sinful meat with fat layer on top and lean meat at the bottom was covered in the rather sweet gravy. Good to go with rice~ 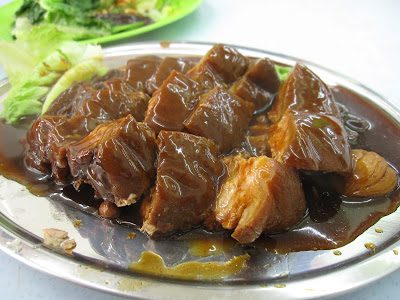 Yaw Mak with garlic and oyster sauce.. another ordinary dish but we need the green to make us less guilty for having such a heavy breakfast :) 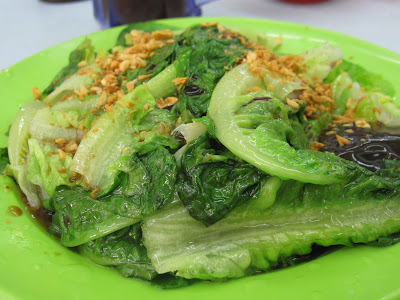 This is the second time I went back to Joe Wong's. This time I took Jenn along to try the dry BKT and she agreed that this was the best dry BKT she had ever tried in years. Apart from that, we also ordered normal BKT. Served in a claypot, the soup was nothing compared to the one I had at Ka Ka (Kepong) or Ah Sang (Sri Setia). Decent but not spectacular. However, they were quite generous with the meat and fu chuk despite ordering portion for one only. 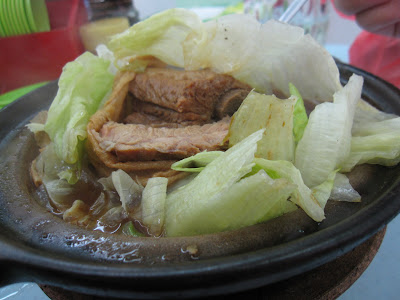 The yaw char koay was chrunchy which I'm quite particular everytime I eat BKT. I hate those soft ones. 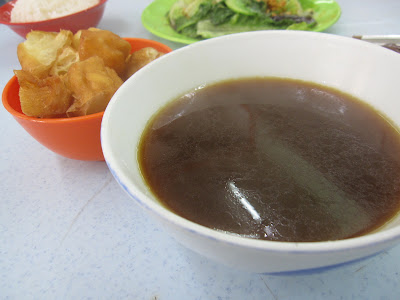 Leo's verdict - the dry bah kut teh definitely warrant a visit to this restaurant. I noticed that the steamed fish head was quite popular with the patrons as well. The other dish include HK style braised duck in claypot that I want to try.

ooh, dry bkt is something i've heard about but not tried yet. seems a bit difficult to find... i've had bkt in imbi, subang and jln ipoh, but all of them only seem to serve the normal soupy version, which i enjoy anyway.
and yay, this place is open for dinner! definitely looks like can have a full, satisfying meal here.
one of my regular dining companions is a heavy smoker, so i'm used to breathing second-hand smoke (he can smoke 8-10 ciggies during a three-hour dinner)...

Ahh...nvr a BKT fan, but I do think I will love the dry version..and my my..tht braised pork!!
Claypot duck?? So when are we making a trip there???

the braised pork looks damn shiok man..haha can get heart attack from just looking at it!

i always prefer the dry version to the soupy BKT :) and the braised pork really looks tempting!!

christine - what r u waiting for?