Looking back at my last post (November 2011)... I realised that I have been missing for more than a year! Workload took a huge chunk of my time in 2012 - the rest was spent with family. Of course, I would still read blogs from those whom I follow from time to time... subjected to free time. At the moment, I would just simply use Instagram to post up the photo of the food that I had eaten which was then uploaded into Facebook.

Despite the convenience of using Instagram, I still love writing... perhaps I was just lazy and being pampered by all those apps in iPhone these days. I don't have time during the day because most of my times were spent down in the factory and when I got back to the office, I had to do paperworks and that didn't include my outstation trips. The remaining time had to be spent with the family when I got home. At night, the wife would normally hog the laptop and thus I didn't have much time to post anything. Forget about Tweeter - I have already stopped using this app after a few months.

Right! Now it's 2013 - new year with new resolution! Chinese New Year is around the corner and all the necessary preparations have been made to celebrate this joyous occasion. After all, this time of the year is the time where I get together with my family and relatives - the only time when all my siblings and parents would sit down for reunion dinner. I truly cherish this moment and that is also the reason why I am looking forward to this holiday. It's a tradition to wear everything new on the first day and I assure you that my wallet has been bleeding one month earlier leading toward February 10th.

My first ever post is on Magic Wok - a relatively established restaurant in Damansara Jaya whom I have never thought of going before even when I moved to PJ. My first visit there was during the Winter Soltice festival but I didn't bring anything there then. We went there again to celebrate Keith's 2nd birthday - and this time I brought my DSLR along. Normally we would go earlier to avoid the dinner crowd. 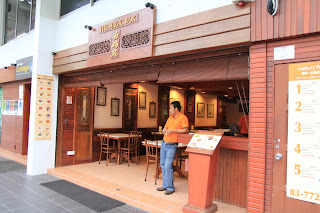 We were the only patrons at that time and so we got all the attention :) it was a restaurant with adjoining bar where a lot of people having happy hours next door. Sometimes they would seat you there if the place was packed! 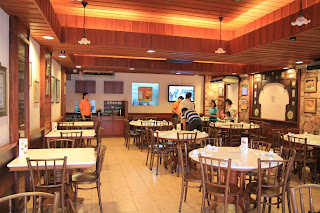 Claypot tilapia with white pepper and roasted meat - the soup was nice enough without overpowered by the white pepper. It was all bones in the end! 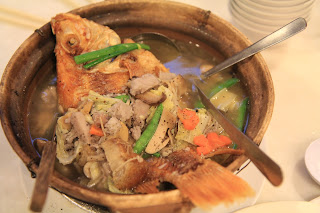 3 meat combination - forget the charsiew, siew yoke was decent (skin was crack-a-lacking) but not memorable and the only good was the roasted duck which I thought was good but still not comparable to Sun Ming Kee in Cheras. 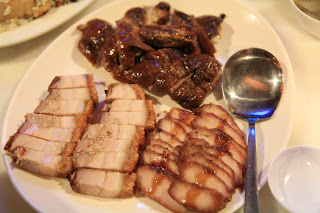 Signature Magic Wok fried rice - wok hei is assured and with the siew yoke thrown into the rice, each and every bite was a bliss 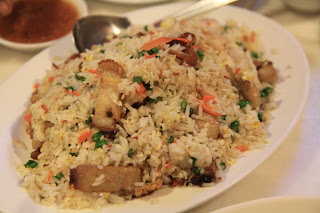 Braised pork knuckle (boneless) akin to the dong po yoke - nothing was left in the end except for the layer of fat on top of the meat. We even sapu all the gravy with the accompanying steamed buns. It was good without being too salty and the meat was very tender with fall-off-the-bone texture. 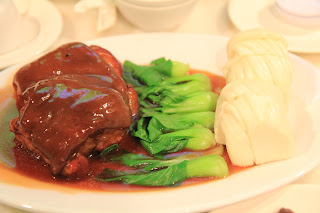 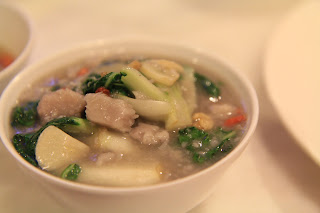 Fried chicken with sliced ginger was definitely the highlight of the night! We would have ordered the second helping if we didn't take into consideration the calory. The chicken meat was aromatic, juicy and still juicy on the inside as we sank our teeth in... and please help yourself to the crispy ginger slices which we could not get enough of!! 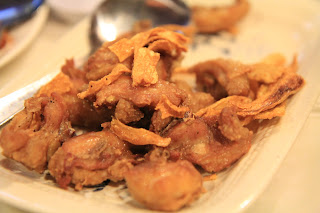 Leo's verdict - this place is family-oriented and the service was quite fast. The servers didn't make a lot of fuss despite Sher Ryn and Keith boy running and playing around. Oh yes... I'll end this blog with a family portrait taken during the dinner. 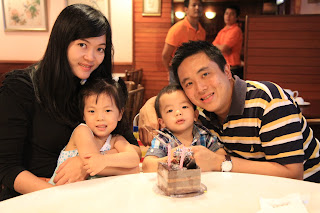 Disclaimer:
1) I'm not paid to promote/endorse any particular event, restaurant or person in this blog. ALL are based on my unbiased personal opinion.
2) My reviews are based on my personal taste and preference and therefore may vary for others.
Posted by thule a.k.a leo at 11:47 PM

ooo, nice to be commenting here again. and your kids have grown a lot since the last time! they used to be babies on your blog, now they're walking, talking children, heheh. but still a beautiful family, really :D y'know, i've never heard of nak bai before. looks like comfort food for a cold night! will try to look around for it :D

Welcome back! Aiyo I echo Sean's sentiment, the last time we met your kids were still babies! Bila mau makan? :)

Very nice place, and I love your family photo! Beautiful! :)

I just wanted to tell you that your reviews are great.

We've recently launched the site roferro.com; Roferro Crunchy Cornflakes is a healthy balanced breakfast with lot of nutrition benefits.
We noticed that you have lots of delicious recipes on your blog and would like to suggest you have a look at our site: https://roferro.com/
If you have any questions, don’t hesitate to contact us on digital@roferro.com . Hopefully your food blog will be up there in the top!
Warm regards,
Jyoshna