I always start most of my posts (if not all) with a short story before going into the details. I think that it has been the way that I write blogs for some time now. Last Saturday, I was invited to a food review by Becky, one of my dear friend whom I got to know when I started blogging. In fact, she is one of the earliest bloggers whom I have met. To be honest, that was my first time going for a food review. I'd been asked to many food reviews in the past but due to my work commitments (hey! I'm not a professional blogger and certainly not doing this full time), I didn't attend any. It was an invite too tempting to refuse and since I was in KL for that weekend, the timing just couldn't get any better.

Mother's Day - let me tell you something about my mom. Having spent most of her time living a simple life, she prefers everything to be simple. For one, she doesn't like traveling and grand celebration with the exception of my wedding and graduation, of course :) Ask her out for a meal and she would definitely shrug her shoulder and reply "Aiyah! No need to go that far la.. so tiring! Food at home is healthier and we've got plenty of food". Mention the word KL and she'd complain on the traffic jam and the tiring 2 hours++ journey from our hometown to the big city. As far as I concern, we actually went out less than 5 times a year just to have dinner outside. That's my MOM!

If you or your mom or even anyone in your family is huge fan of Rod Stewart, then you are in for a treat. In conjunction with Mother's Day, Rob Caudill (not Rod Stewart?), a dead-on Rod Stewart impersonator all the way from Las Vegas, USA., will be serenading you with the classics from the legend. He will be featuring 'live' at Atrium Cafe's Mother's Day Hi-Tea buffet showcase only for a day on Sunday, 8th May 2011. Mark this day up and plan by hook or by crook if you love his songs - Have I Told You Lately, Sailing & The First Cut is The Deepest - just to name a few. 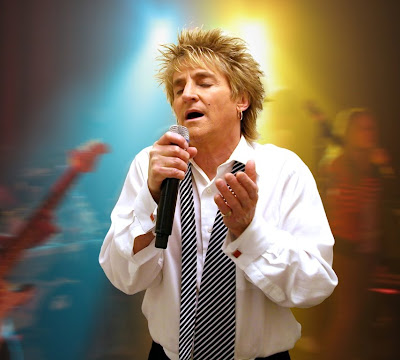 Apart from the performance, expect a sumptuous feast highlighting the best of Asian-heritage dishes accented with exotic flavours of Malaysian, Chinese, Indian, Indonesian, Japanese and other specialties. Since this was the preview of what you are going to have on the Mother's Day itself, I could say that all the foods are GREAT! As a matter of fact, I am not a big eater but I love varieties and that is the reason why buffet meal appeals to me. 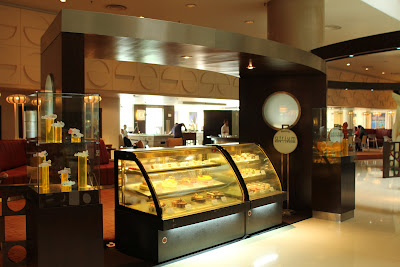 By 12pm, most bloggers had already arrived and started to snap pictures. I did exactly the same with my new toy Canon EOS 60D. And then I started to strike up conversation with those whom I have not met before and of course, familar faces such as Becky and Joa-Quim.

For RM55++ (FYI, it will be RM98++ on Mother's Day itself), I can say that you will be spoilt with choices and the foods are worth the money paid! 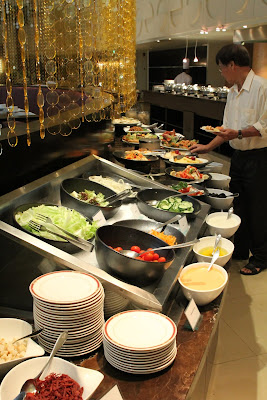 Being a bread lover, I knew that I had to have this the moment I laid my eyes on the dish. 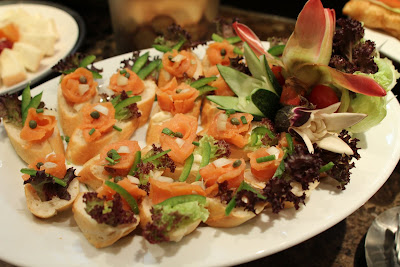 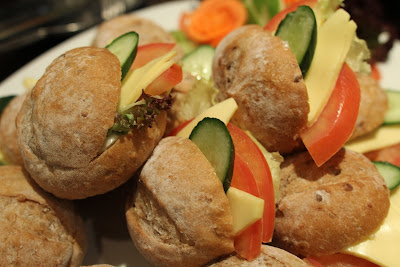 And this... since I'm not a big eater, I only had 2 out of more than 10 varieties. However, I admit that everything looked delicious. 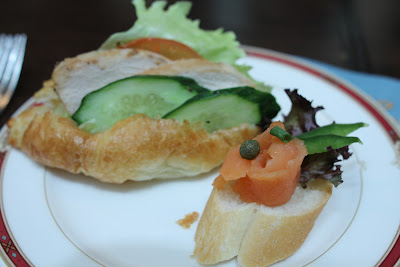 As I took more and more pictures, my stomach started to growl at the sight and smell of the dishes - especially this Deep Fried Fish Fillet with Salted Egg Yolk. The lightly battered fish fillet was deep fried before coated with the ever sinful yet aromatic salted egg yolk. It was good without overpowering the sweetness of the fish fillet. One of my favourite dishes that day! 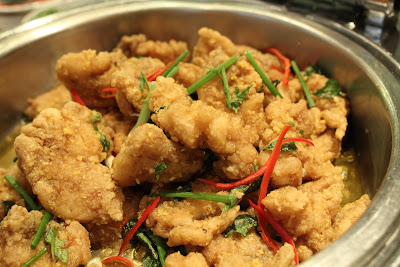 My other favourites include Chinese Roast Duck with plum sauce. The people at Atrium Cafe had nailed this hard-to-make dish right. Although the skin was not as crispy, the meat retained most of its moist and it was such a delight to sink my teeth in! 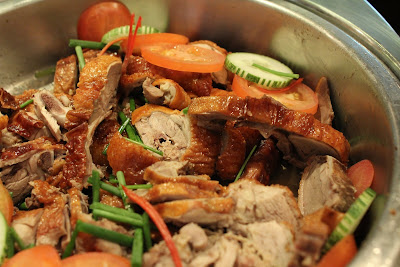 And this - Hongkong style Wantan Noodle prepared right on the spot as you ordered. Initially I wanted to skip but upon hearing some of the bloggers who raved on the bowl of freshly prepared noodle, I decided to give it a try. And it didn't disappoint - the egg noodle was so spring-y and the soup was sweet. 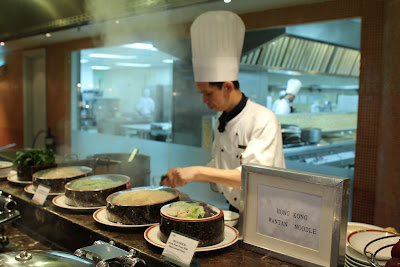 The soup and dry version of the wantan noodle side-by-side! Tried a little bit of the dry version and it was as good as the soup version! 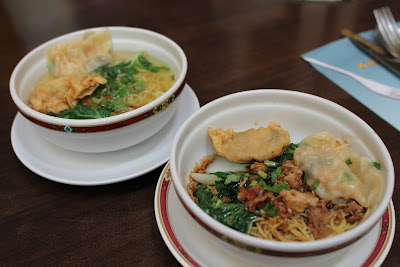 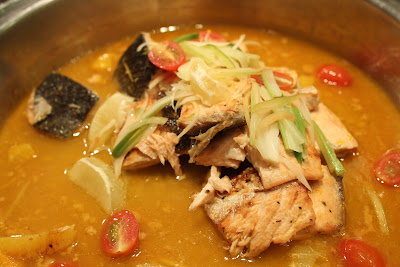 Slow baked potato should you crave for some carb goodness 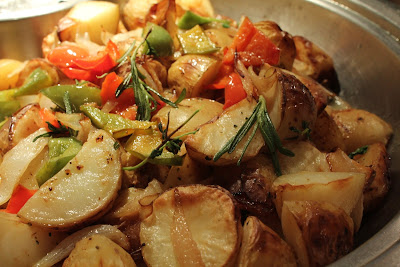 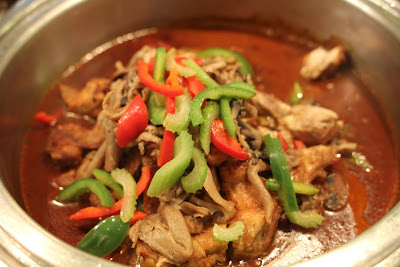 A taste of Chinese with this Wok Fried Prawn with Chilly and Cashew Nut. 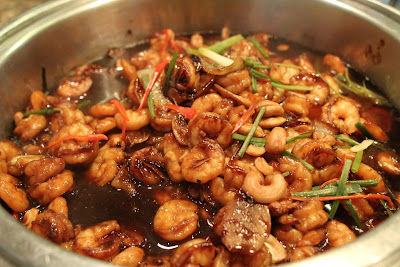 For a taste of India, don't forget to try the Chicken Tikka. Also the briyani rice but I forgot to take picture! 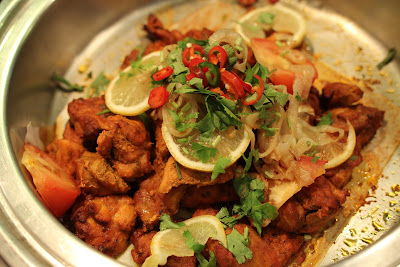 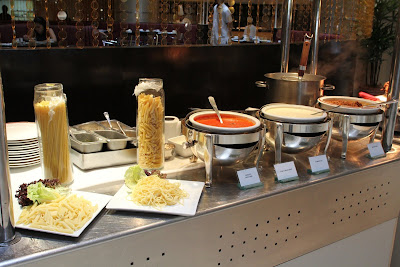 Since I can't eat beef and I don't eat lamb, chicken is the next best thing that I could have so I had this chicken kebab. I thought that the meat was very succulent and juicy but the pita bread was a bit soft and cold. 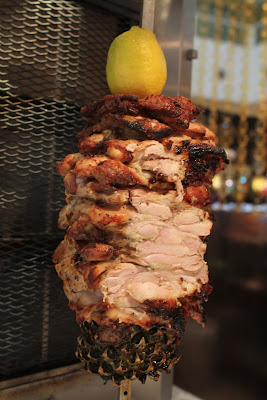 The only Malay food that I had was this Roti Jala, something that I would not get tired of eating. My current favourite version was bought at pasar malam but they whipped out an equally good version too. My only grouse was the curry gravy which was quite spicy to my liking (others said the same too). Hope they would tone down the spicy-ness of the curry on that day! 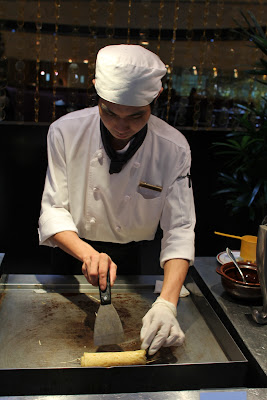 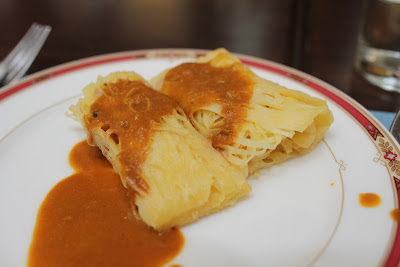 The 2 dishes that I didn't try were Braised Ribs with Tamarind BBQ Sauce & Grilled Lamb Cutlet with Rosemary and Mint Sauce - from what Becky said in her blog, the ribs were tough and rather chewy despite being braised. However, the lamb cutlets were done just right and very flavourful too! 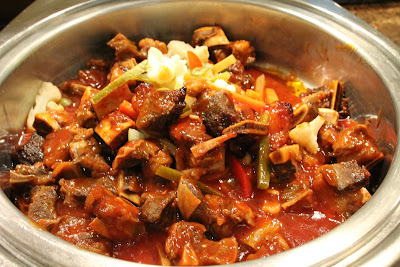 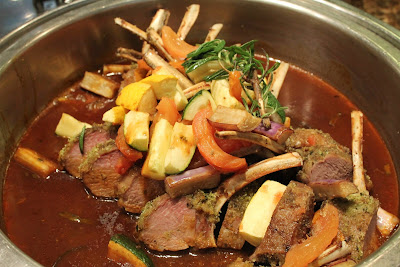 After gorging on all the foods, we stopped and chatted for a while before helping ourselves to the dessert sections. For those who have sweet tooth, you definitely have to come and try it yourself. 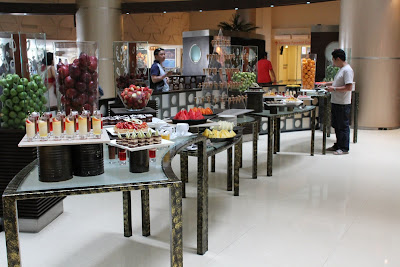 Words alone are not enough so I'll let the pictures to do the talking instead! 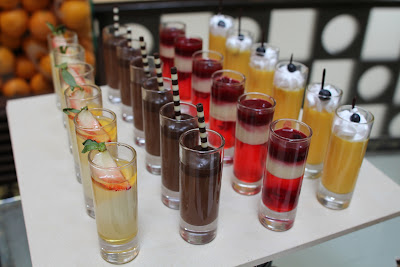 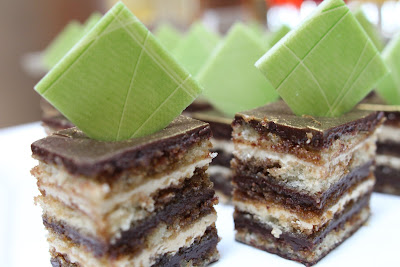 Plump and juicy strawberries anyone??? 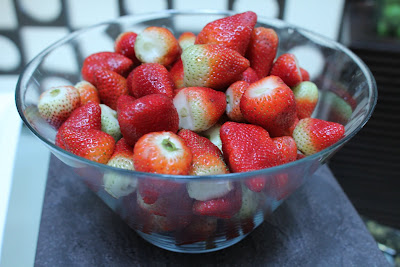 Since I couldn't possibly taste all the desserts, I choose those with chocolate as ingredients!! Just the sight of the plate filled with all chocolate-y goodness was enough to make me drool. 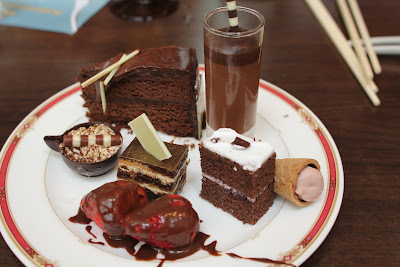 Look at the 2 huge roast racks of beef. I was so tempted to try those and would definitely do so if not for my religion. Those who had this said that it was good though! 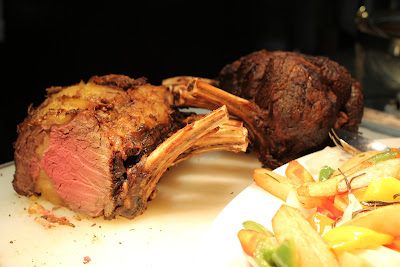 Thanks to the sweet and beautiful Virgillia Lee, who had been our host for the day. 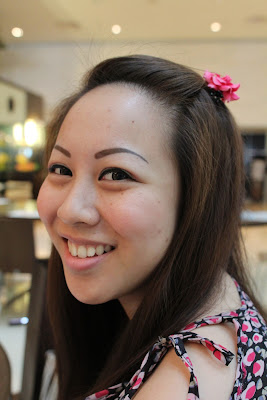 Leo's verdict - I was not able to try all the dishes but feedback from other bloggers were encouraging and since most of the foods that I had were good, I could say that it is worth coming here to celebrate Mother's Day. Service was fast and attentive too. With variety of good foods plus power-packed performance, it is the best of both world. For me, I don't mind pampering my mom with these delightful dishes but that is, if she wants to come! Arrgghhh!!! 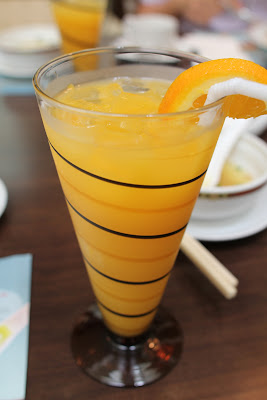 Disclaimer:
1) I'm not paid to promote/endorse any particular event, restaurant or person in this blog. ALL are based on my unbiased personal opinion. However, this was a food review so I didn't have to pay for the meal.
2) My reviews are based on my personal taste and preference and therefore may vary for others.
Posted by thule a.k.a leo at 4:15 PM

my mom also likes to keep things simple! her birthday is at the end of next month, so will need to think of two places to take her in may, for both mother's day and then her birthday two weeks later! we'll probably do chinese food though :D

Read about this same thing at another blogger's blog. All the food really make me hungry now....

Try your best to bring her here lo!

awwww I got the invite but had to work that day, otherwise could hv catch up with you guys

for that price the buffet is really a good deal!

For buffets, I hit the dessert section straightaway and don't leave till I'm stuffed! :P

Thks fr comin that day. Alws lovely to see u again. Ur one of the best blogger friends I've got :)