Those who have been reading my blogs regularly (lol! not that I'm that popular) would know that I travel between Pahang and KL regularly. Living in a rather small & quaint little town can be quite boring after a while so what can be better than driving to KL which is like only 2 hours from my hometown :) it used to be more than 3 hours in the past but the route from Bentong-Raub-Kuala Lipis had been straightened up so it was a JOY for me.

In the past, Jenn & I could afford to stop wherever and whenever we wanted. Now with 2 kids in tow, planning is essential and most of the time, we would end up in Bukit Tinggi area around lunch time. With a lot of restaurants mushrooming in this area, you would be spoilt with choices. However, only a few of them really stand out from the pack and Remember 126 is definitely one of them :) despite its rather funny name, the food is good and service is relatively fast. Jenn & I have become their regulars and they would greet us with huge smile on the face. They even know Jenn's parents who dine there too! 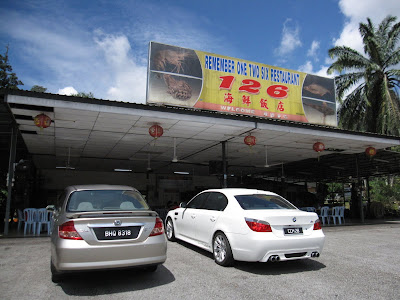 The restaurant is HUGE and airy, something that we absolutely love. This restaurant is one of the most popular (if not the most) restaurants here and the evidence is shown by the almost full house state despite weekdays. 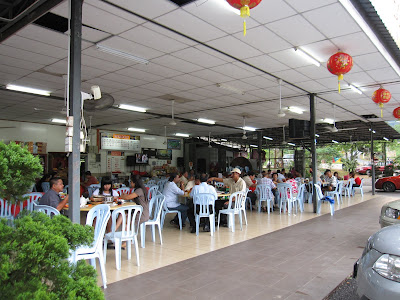 At the time I wrote this post, I had gone there countless times hence the amount of food that I am going to post in this blog. All in one mah :P 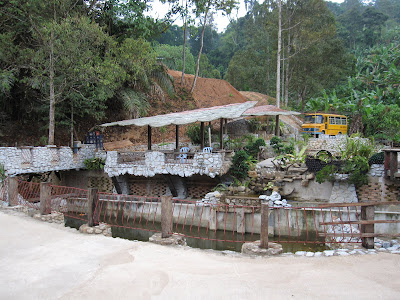 What I love most about the food is that the consistent standard. One dish that stood the test of time is the stir fried baby water cress with chopped garlic. The green was just so fresh and they would use finely chopped garlic than crushed garlic cloves (I'm very particular on this), therefore the aroma of garlic was infused into the water cress evenly. There were times that I would order the second plate as I could not get enough of this. 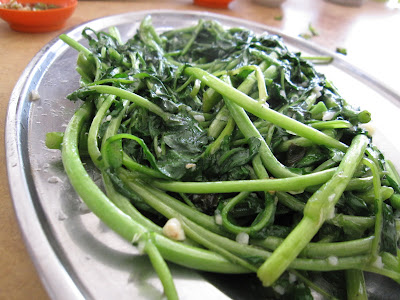 Another must-order dish in Bukit Tinggi area is the deep fried pork belly with caramelised sauce. For some reason, I never grow bored of this dish. I simply love the fact that the pork belly is very crispy , so crispy until I forgot the fat layer which I avoided most of the times. The sweet gravy was a pefect companion to the rice and enhanced further by the chopped onion. One grouse though was that the amount of onion sometimes more than the meat. 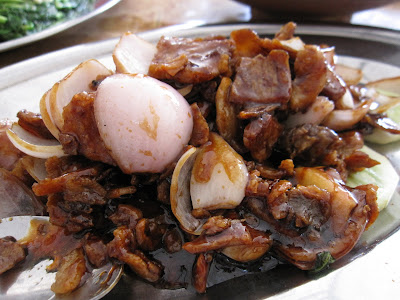 Another porylicious dish that must not be missed is the claypot pork belly with salted fish. As sinful as it sounds, I could not resist the aroma of high-grade salted fish that was used to cook this dish. However, their version was quite oily so for those health-conscious people.. stay away from this OK? 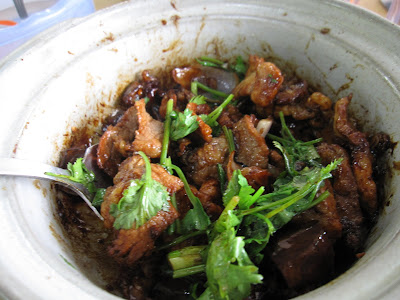 A trip to Bukit Tinggi is not complete without the fish! Yes... FISH specifically river fish. Here are some of the versions that I'd tasted - starting with steamed bak sou gong (silver catfish) with shredded ginger and superior soy sauce. Cost only RM30/kg.. even though this fish is not caught in the wild, it's meat was sweet and flaky without the dreaded muddy taste normally associated with reared ones. The fish is reared in the river uphill with constant flow of clean water. You can opt for the wild ones which easily cost double the price but generally still cheaper compared to KL's standard. 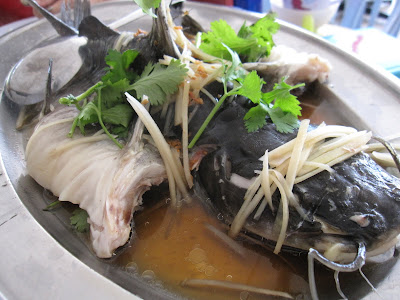 Steamed "wan" fish with crushed ginger is another favourite of us. Heaps of famous Bentong ginger were used to provide extra pungent taste (in a good ginger way) to this fish. Just beware of the fine bones which are literally everywhere in its body! 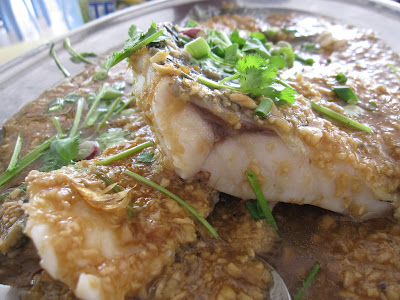 Steamed asam tilapia - without the muddy taste normally associated with this fish, the sourish and slightly spicy asam gravy was a heaven for us. It never fails to persuade me for a second bowl of white rice everytime. 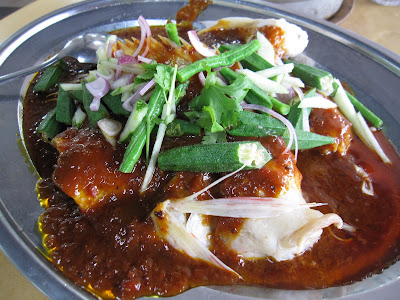 Claypot curry fish head - garoupa head was used to prepare this dish and even though the name was exciting, the curry somehow failed to make its mark! I had better version in KL and in my hometown. 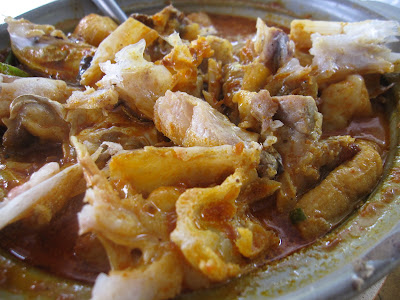 However, the fish head was fresh and the meat was definitely succulent! Just look at it :) 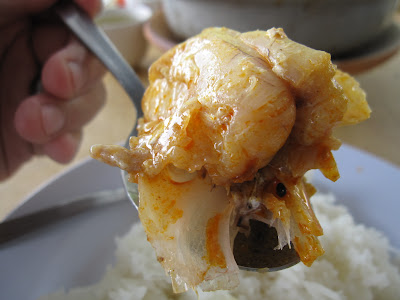 Other dishes include this stir fried bittergourd with egg - simple yet satisfying dish that I could not get enough of. It was a little bitter but I love it. 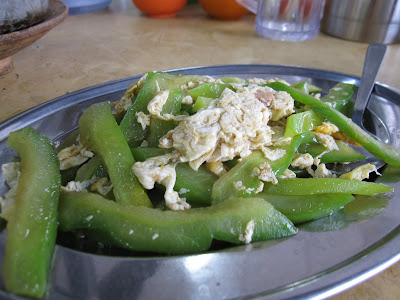 Claypot taufu with assorted vegetables was passable but not memorable. 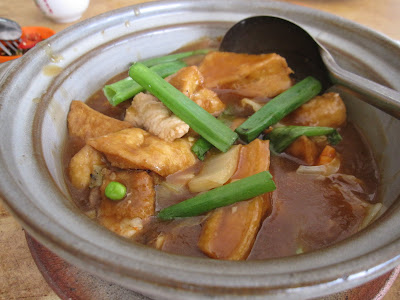 Leo's verdict - on average our lunch here (3 dishes) cost approx. RM50 with the fish! Can you get a better deal anywhere in KL? Parking is ample and given that this area is less than 30minute drive from KL, a weekend drive here is not really that far away right?? Given the fact that we are usually stuck in the traffic jam for more than 30 minutes...

Disclaimer:
1) I'm not paid to promote/endorse any particular event, restaurant or person in this blog. ALL are based on my unbiased personal opinion.
2) My reviews are based on my personal taste and preference and therefore may vary for others.
Posted by thule a.k.a leo at 4:08 PM

The foods look presentable. I dint know there's this restaurant at Bkt Tinggi, never been there before.

interesting name, wonder what significance of the number 126 is! :D this definitely makes me feel like having fish for dinner tonite, preferably one that's steamed and whole. i don't think i've ever tried bentong ginger before though...

eventhought its only 7:41am, by looking at your post makes me drool!!!!..... I will definately visit there with my parents one day...

the fish definitely is the main draw at Bkt Tinggi. hopefully we could afford the time to jalan2 cari makan which is diff wid a kid in tow

Would really love that pork belly dish I think. Looks so good! *drool*

gosh after reading this i totally forgot about visiting gohtong jaya for dinner during my trip back! i want to eat the pork dish!

i will eat everything here except that bittergourd with egg dish!

and the stuffed tofu pok is good, too.

hayley - it's very easy to find! but from your place, it's kinda far away though... but if u go to Genting, it's only 5min drive away from the rest area!

Sean - so did you have fish that night?

Jean - they wil love it!

babe_kl - we can always plan :) u bring yours, I'll bring mine

J - pretty sure you'll get addicted on the first try

Joe - Gohtong Jaya is more expensive compared to this area! It's targetted at tourist but Bukit Tinggi do a lot of regulars

eiling - just try to like bittergourd.. I used to hate this dish as much as you do!!

I am imagining a second, third and maybe even fourth helping of rice to go with all the gravies, curries and sauces here. Yums! :D